PURCHASE, N.Y., May 18, 2021 /PRNewswire/ — #FORTHELOVEOFIT – Today, UEFA and Pepsi® reveal that award-winning global superstar Marshmello will headline this year’s UEFA Champions League final Opening Ceremony presented by Pepsi. The platinum-certified artist/producer known for smash hits ‘Happier,’ ‘Silence’ and ‘Friends,’ will present a one-of-a-kind performance on Saturday, May 29th, preceding one of the world’s most watched live sporting events – the UEFA Champions League final. Now in its fifth year, the Pepsi-presented Opening Ceremony will see Marshmello deliver a virtual six-minute spectacle using the latest in immersive technology, a first for both Pepsi and UEFA. 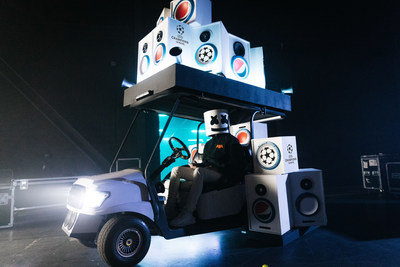 Marshmello commented: “This really has been a year like no other. I’m looking forward to giving my sport, music, and pure entertainment fans a show like they have never seen. Thanks to Pepsi and UEFA, that is exactly what I am going to bring to the world – a performance that everyone can enjoy.”

To announce his performance, Marshmello is seen in a creative video mulling over options for his next show. Suggestions come from a few familiar faces, including all-time GOAT Leo Messi, world champion Paul Pogba, and Borussia Dortmund sensation Jadon Sancho, as well as members of global music group Now United. With the closing scene featuring the award-winning artist alongside the iconic UEFA Champions League Trophy, anticipation for an epic show is building for fans around the world to experience.

PepsiCo’s Vice President, Marketing, Global Beverages, Natalia Filippociants, said: “Pepsi has been building the Opening Ceremony platform alongside UEFA since 2016, and this year’s show will take it to the next level. Pepsi knows entertainment – and at times when the world needs it the most, Pepsi brings joy and levity. While there might be fewer people in the stadium this year, there will be no less energy and excitement. Marshmello is the perfect artist to kick start this year’s UEFA Champions League final with heart-pounding joy and a set list filled with anthems of celebration that transcend genre, appealing to football and music audiences globally. Fans should watch for more exciting announcements – including some special guests – so stay tuned.”

The UEFA Champions League final is one of the most hotly anticipated annual sporting events in the world, and this year’s match will air in over 200 countries and territories. The Opening Ceremony presented by Pepsi will be broadcast just minutes before the biggest game in European club football gets underway. The 2021 Opening Ceremony runs across the international Pepsi trademark, which includes Pepsi, Pepsi Black / MAX and Diet Pepsi.

“We are excited to be collaborating with Pepsi for another year, uniting music, entertainment and sport to delight fans all over the world,” said UEFA marketing director Guy-Laurent Epstein.  “Our close partnership has had great success in bringing huge names and epic performances to the UEFA Champions League final, and we know that Marshmello will put on an unforgettable show.”

For more information, visit www.facebook.com/uefachampionsleague and the official Pepsi social pages around the world. Join the conversation online with #FORTHELOVEOFIT.

About PepsiCo
PepsiCo products are enjoyed by consumers more than one billion times a day in more than 200 countries and territories around the world. PepsiCo generated more than $70 billion in net revenue in 2020, driven by a complementary food and beverage portfolio that includes Frito-Lay, Gatorade, Pepsi-Cola, Quaker, Tropicana and SodaStream. PepsiCo’s product portfolio includes a wide range of enjoyable foods and beverages, including 23 brands that generate more than $1 billion each in estimated annual retail sales.

Guiding PepsiCo is our vision to Be the Global Leader in Convenient Foods and Beverages by Winning with Purpose. “Winning with Purpose” reflects our ambition to win sustainably in the marketplace and embed purpose into all aspects of our business strategy and brands. For more information, visit www.pepsico.com.

About Marshmello
Marshmello’s star continues to rise as the famously masked artist breaks boundaries across the industry, with chart-topping singles and collaborations with the likes of Juice WRLD, Halsey, Demi Lovato, Bastille, Kane Brown, Selena Gomez, and more. Marshmello has clocked almost a staggering 10.5 billion streams across Spotify alone, and with almost 45 million monthly listeners on the platform, he’s one of the top 30 most-streamed artists in the world on Spotify and the 3rd most subscribed artist on YouTube. Featured on the cover of the Forbes magazine “30 Under 30” issue, Marshmello has proved to not only be an innovative producer, but a forward-thinking businessman. With his own brand of chocolate-filled marshmallows, “Stuffed Puffs”, he’s also launched a children’s entertainment channel, Mellodees.